I, and many others across America, have jumped on the Marie Kondo bandwagon. I use an IKEA storage solution for my clothes, which uses tall bins in place of drawers. While I love how the triangular folded clothes look in the bin, I needed some SKUBB boxes to give me a second level of storage in the bins (to separate long sleeved shirts from short sleeved, or socks from underwear, etc.). We also had some record-breaking weather in NC this week, so I decided that it was time to cash in a few vacation hours and see how the Energica EVA did on a long trip.

I used the PlugShare Trip Planner to determine my charging options. I was in luck: There was sufficient coverage of DC Fast Chargers operated by Greenlots along Interstate 40 and 85. The Energica uses the Combined Charging System (CCS), and all the sites had that connector along with CHAdeMO (used by the Nissan LEAF). PlugShare checkins (please, please, please, check in from time to time) indicated that the stations were all operational, many having been used within the past few days. One station in particular – Salisbury – had a useful comment from a recent user, stating that it was a “unique flower.” I’ll talk more about that in a minute. Now that I had a route planned – all standard highway – could the Energica handle it? Would I run out of range? In my testing, real-world range is at most 75 miles. The longest leg of the trip was 51 miles from Greensboro to Salisbury. The only way to find out was to go, so that’s what I did. 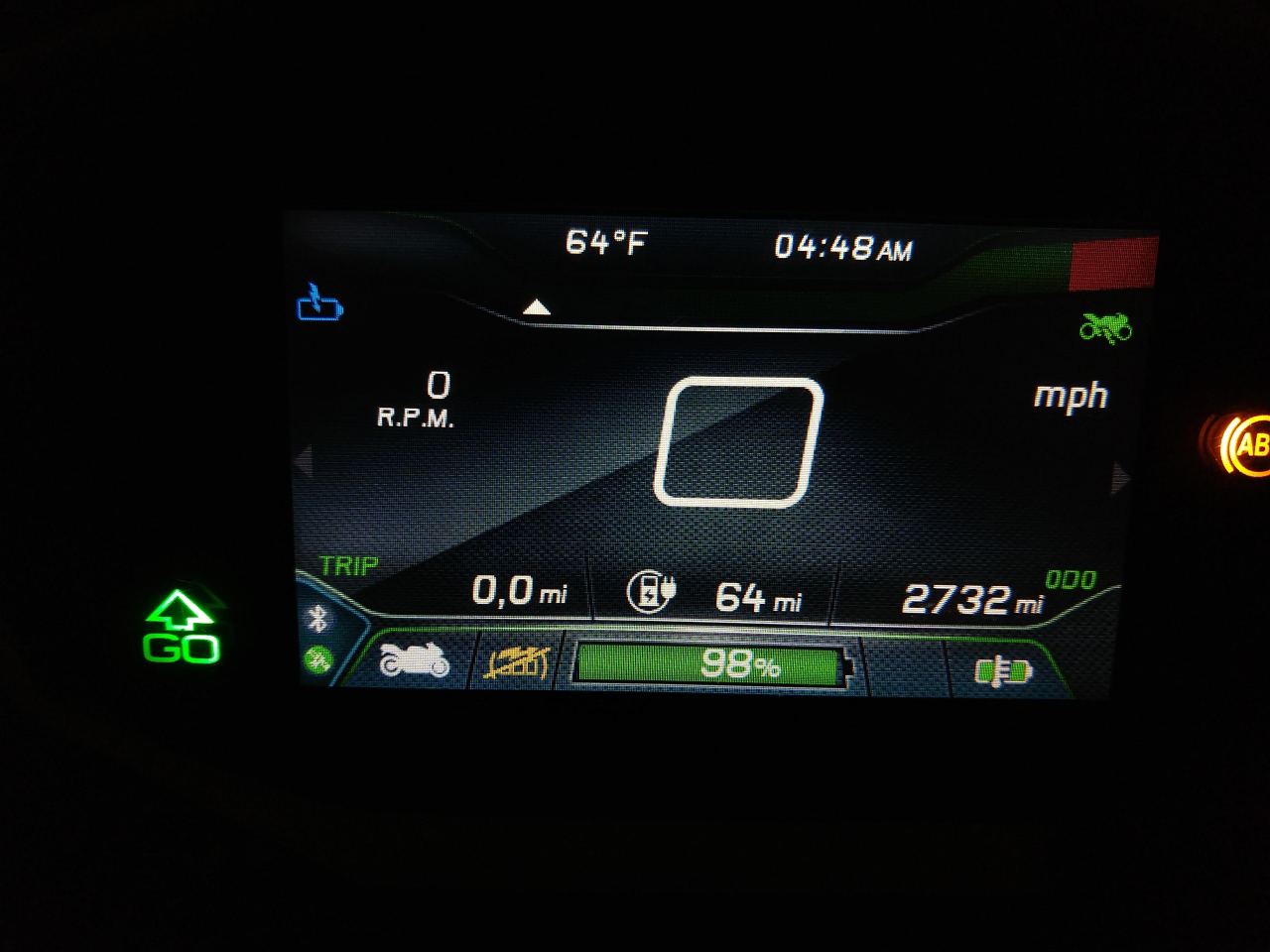 I had planned to leave at 6 a.m., but I was up at 4 (which is normal for me when I’m excited about a trip). At 4:50 a.m., I departed my home in Raleigh with 98% Battery State of Charge (SOC) and headed straight for Hillsborough’s Farmers Market Charger. I stopped off at Hardee’s and grabbed a chicken biscuit for breakfast, and I’d packed a small travel bag with bottles of water and some other tools I’d need to secure my IKEA cargo. I arrived at the station at 5:37 a.m. with 20% SOC and plugged in for my first DC Fast Charge.

I’ve noted the charge time estimate on the Energica operates on the Disney philosophy: Overestimate so the customer is pleasantly surprised that the line moved faster than expected. Or in this case, the electrons. Either way, the bike estimated 28 minutes to 80%, but it did it in under 20 minutes. It’s also important to note that the maximum amperage that the Energica can pull is 70, and once the battery begins to warm up or reaches the “top” of the pack (above 80%), the amperage draw will begin to drop off. 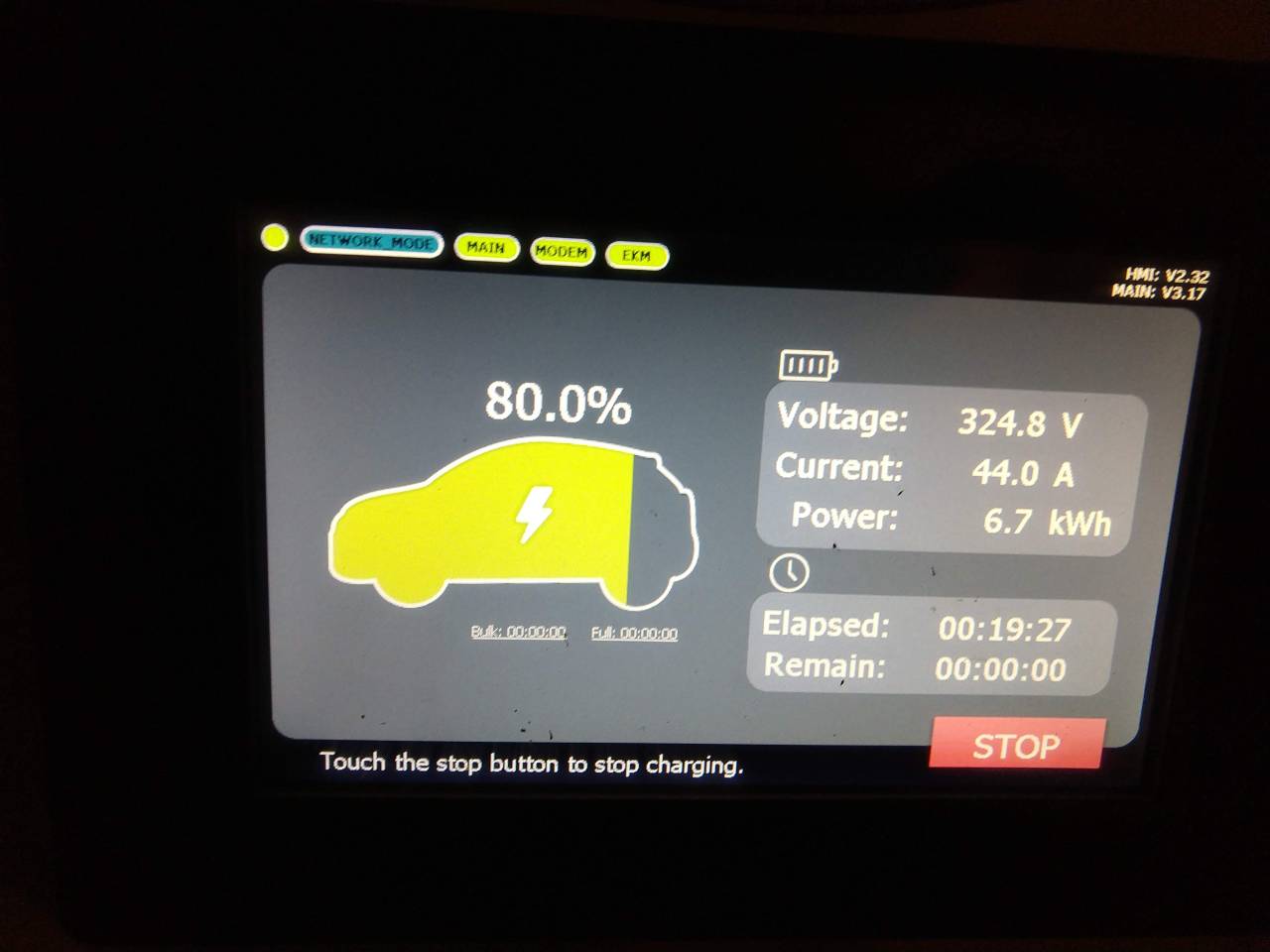 I decided to charge for another 5 minutes, leaving me at 88% SOC. I’d already ridden to Greensboro the weekend prior (and, ironically, coming back from that trip I accidentally ran out of power less than 4 miles from home at the intersection of Six Forks and Millbrook road in Raleigh). I knew 80% was all I needed to get to Greensboro, and having the extra buffer is always nice. 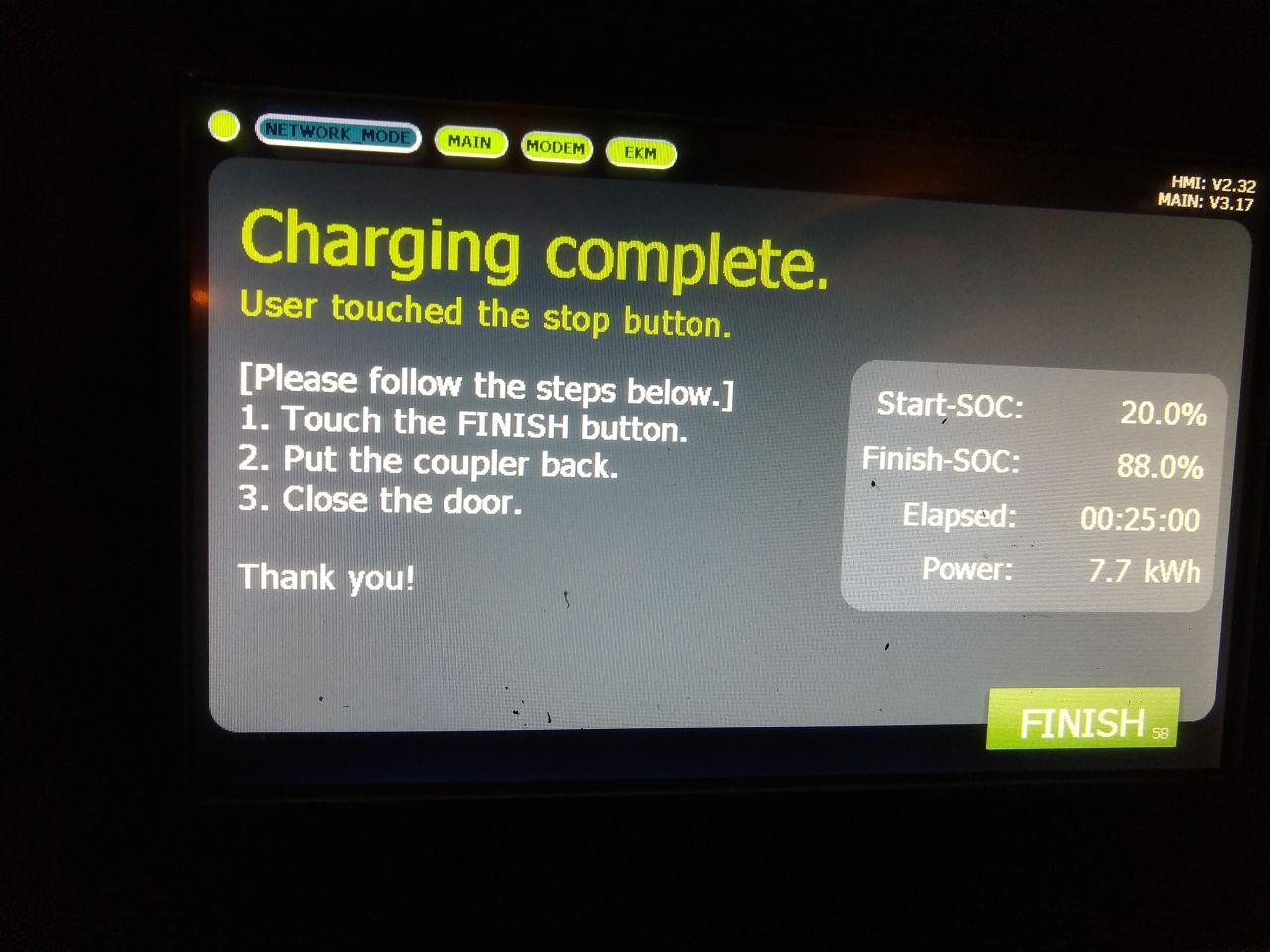 I budgeted 30 minutes per charging stop, but it turns out that most of them would be less than that. I arrived in Greensboro with 11% SOC. 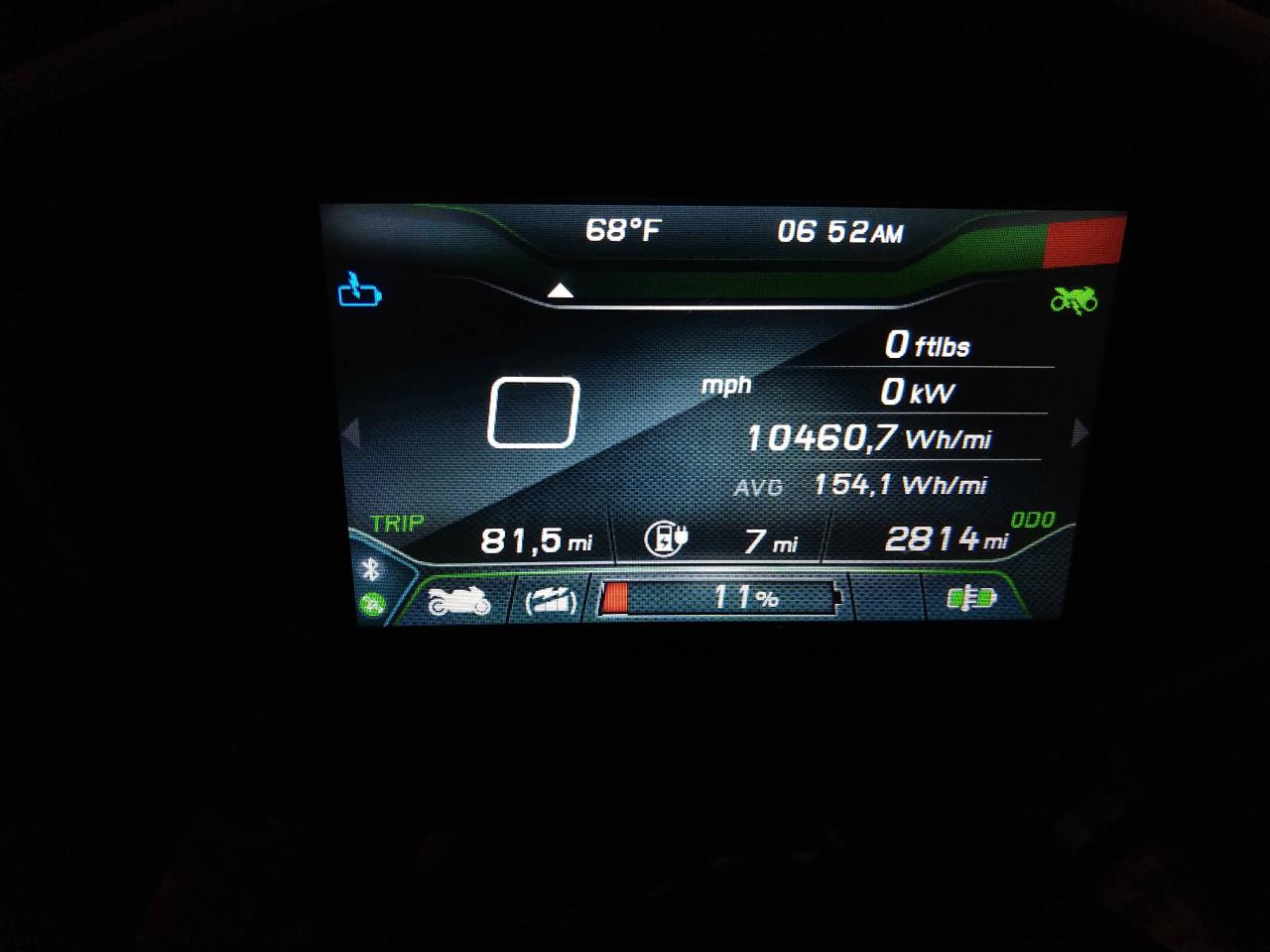 This leg got to me. I don’t have a way (yet) to mount my phone on the handlebars so I can see the map, so I use wired headphones and listen to the audio prompts. This can lead to range anxiety when you get below 20% SOC and you think, but don’t know, that the exit is just a few miles ahead. I never lost power on the highway, but I did drop my speed to 65 once I got down to 14%. The moment I got on the exit ramp, I switched from Urban riding mode to Eco (top speed of 55 mph with reduced acceleration). I limped my way the 2 miles off the highway to the charger, arriving with a scant 3%. To say I was nervous puts it mildly, but I made it. 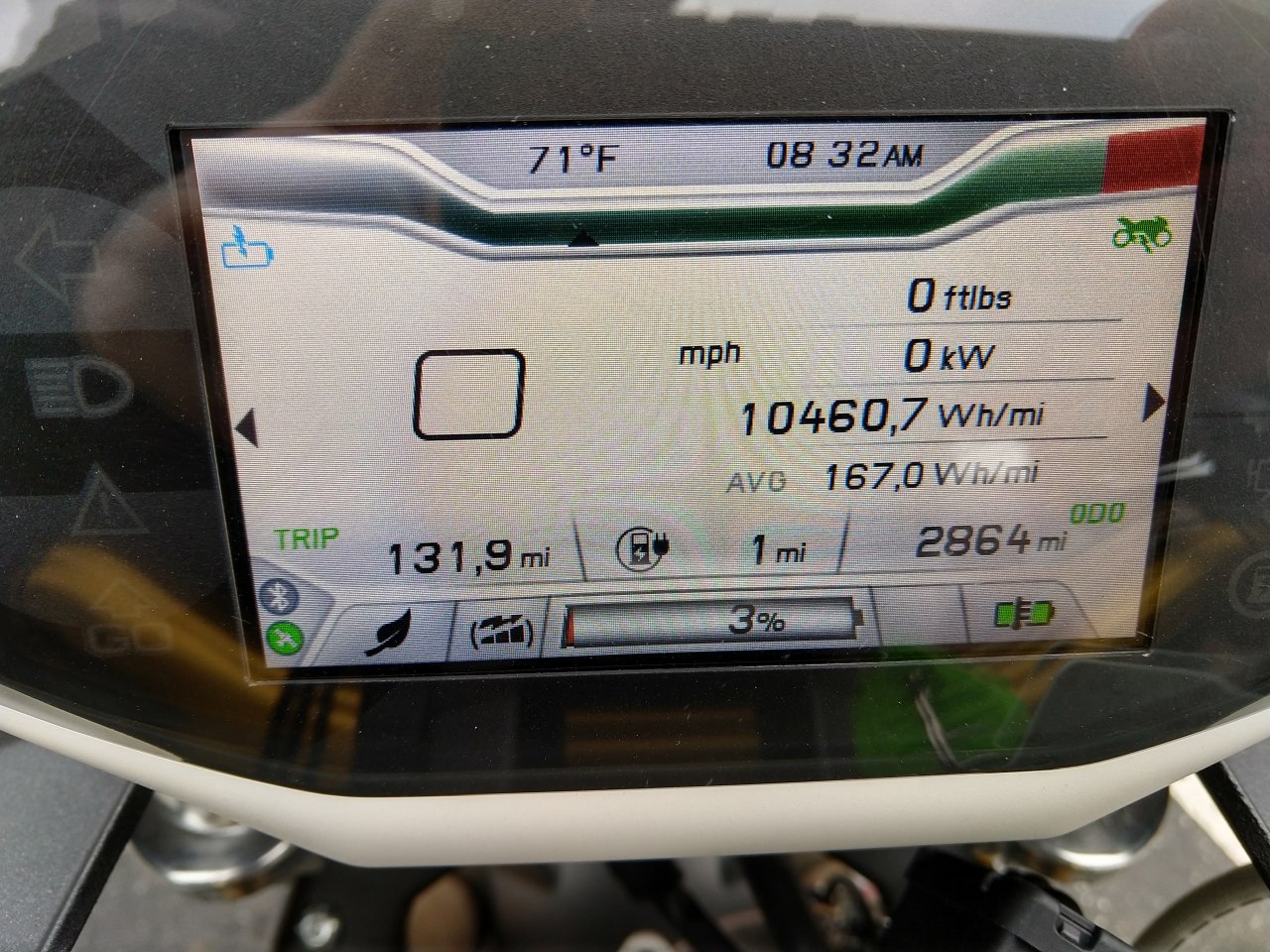 Remember earlier, when I said Salisbury was a “unique flower”? Well, that rang true. I plugged in and the machine faulted, blinking red. The problem is that the screen is 100% fogged over from acid rain, and you cannot read it nor tap any of the software buttons to end your charge (this is why I’m such a stickler for having physical buttons on things). I had to call Greenlots customer support, who managed to reset the station. I tried again, using the suggestion to hold the plug to my bike until the charger lock engaged. That worked, and I charged for 33 minutes. Because I was so worked up, I didn’t record what SOC I ended the charge. I couldn’t snap a photo of the session summary due to the bad display on the station, and the session history in the app doesn’t include the start/end SOC metrics. Oh well, we’re only 30-something miles to Charlotte. I set the bike back to Urban mode and took off!

Now, I didn’t go directly to IKEA. There is a $3,000 Smart Electric Drive that’s allegedly got a bad battery at a big used car dealer down there. Their closest location to IKEA was just a few miles away, so I beelined there first to ask about the car. Turns out, the car was at their South Charlotte location – which was a few miles away from the Southpark Mall (and an EVgo charging station). I decided to stop in for a quick top-up before I went to the other store to look at the car. 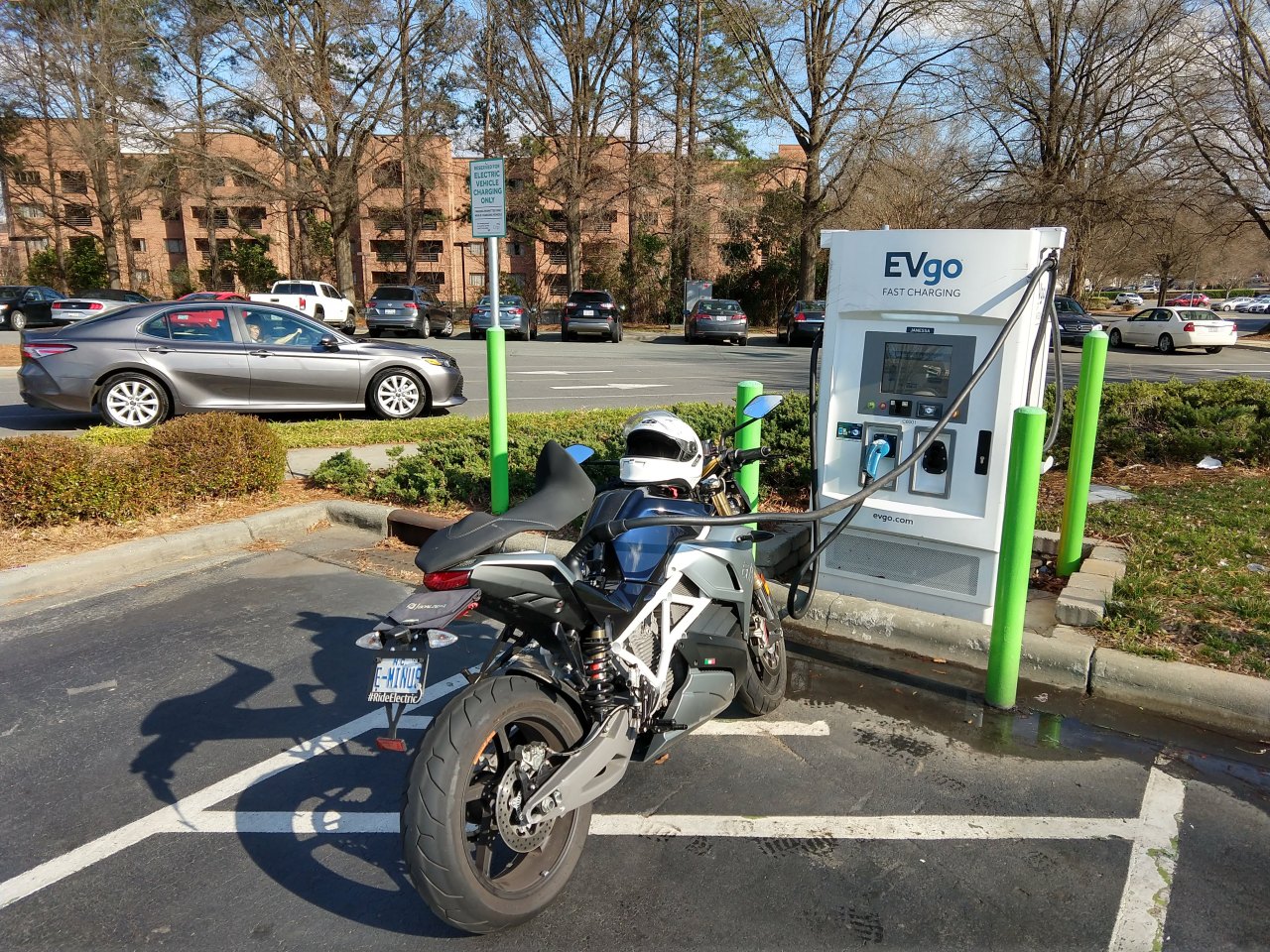 I arrived with 19% power and charged for 16 minutes, bringing me to 63% SOC – plenty of range for my scavenger hunt. While I was charging, I snapped the above photo. I didn’t notice the look on the passenger’s face until writing this post – it’s kind of priceless. Anyway, back to the journey…. 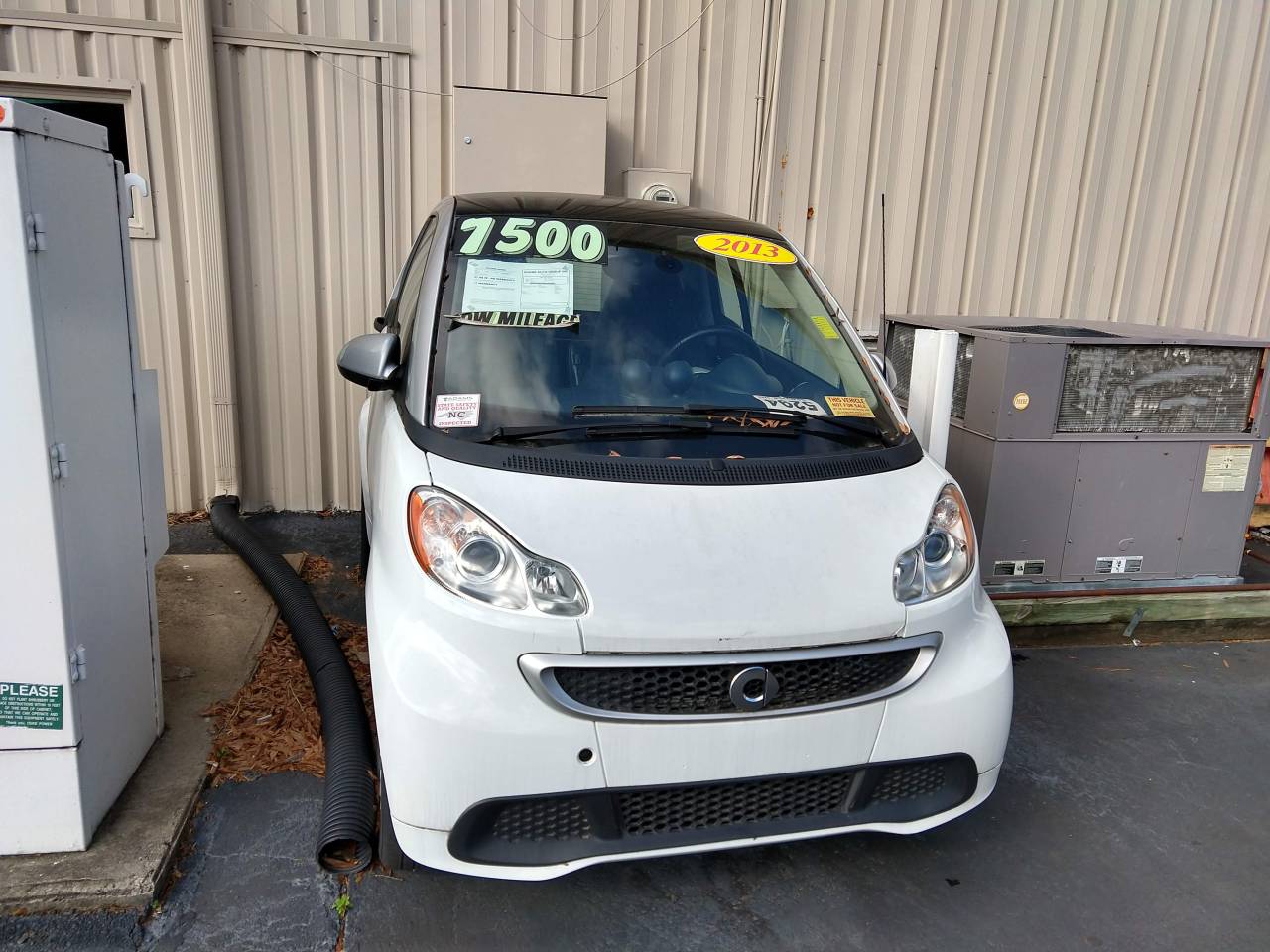 I found the Smart! It does need a battery pack – because the Battery Management Module is integrated to the pack and Mercedes doesn’t sell the subcomponent on its own. I offered them $3,000 out the door delivered to Raleigh, and they said they’d call after talking to the owner … I’m still waiting on their call. Ah well, time to go shopping at IKEA! 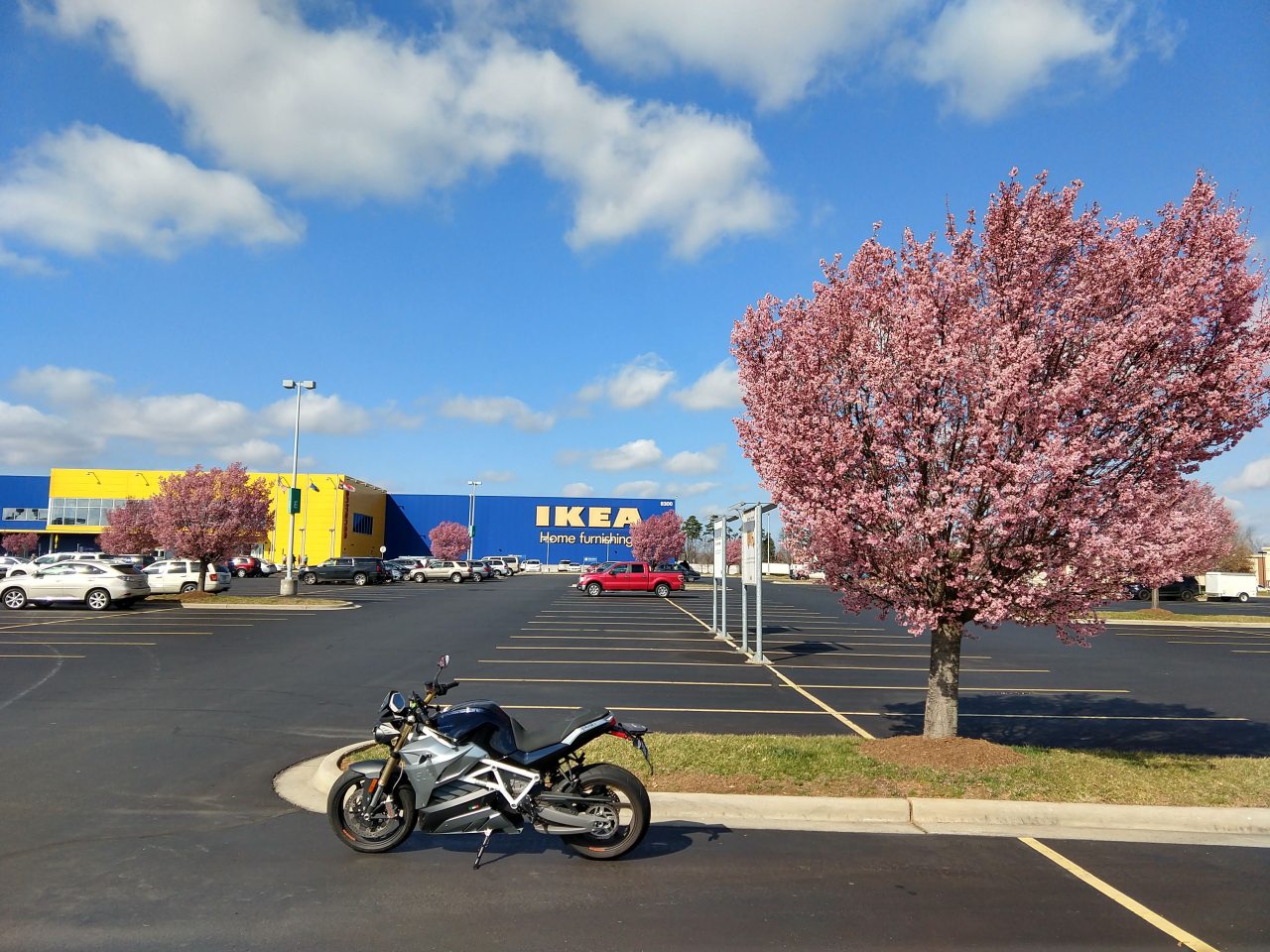 I made it! Also, look at that sky! It was so glorious a day to be on two wheels. After a much needed lunch, I got my shop on. Now, you may be wondering how I planned to get my purchases home on the bike. IKEA lists not only the product dimensions (interior and exterior), but also the packaging size. This let me figure out that I didn’t own a single backpack – not even my beloved Velomacchi Speedway pack – that could hold the products I’d planned to purchase. However, IKEA really does have it all; they had a backpack that was big enough to hold the following list: 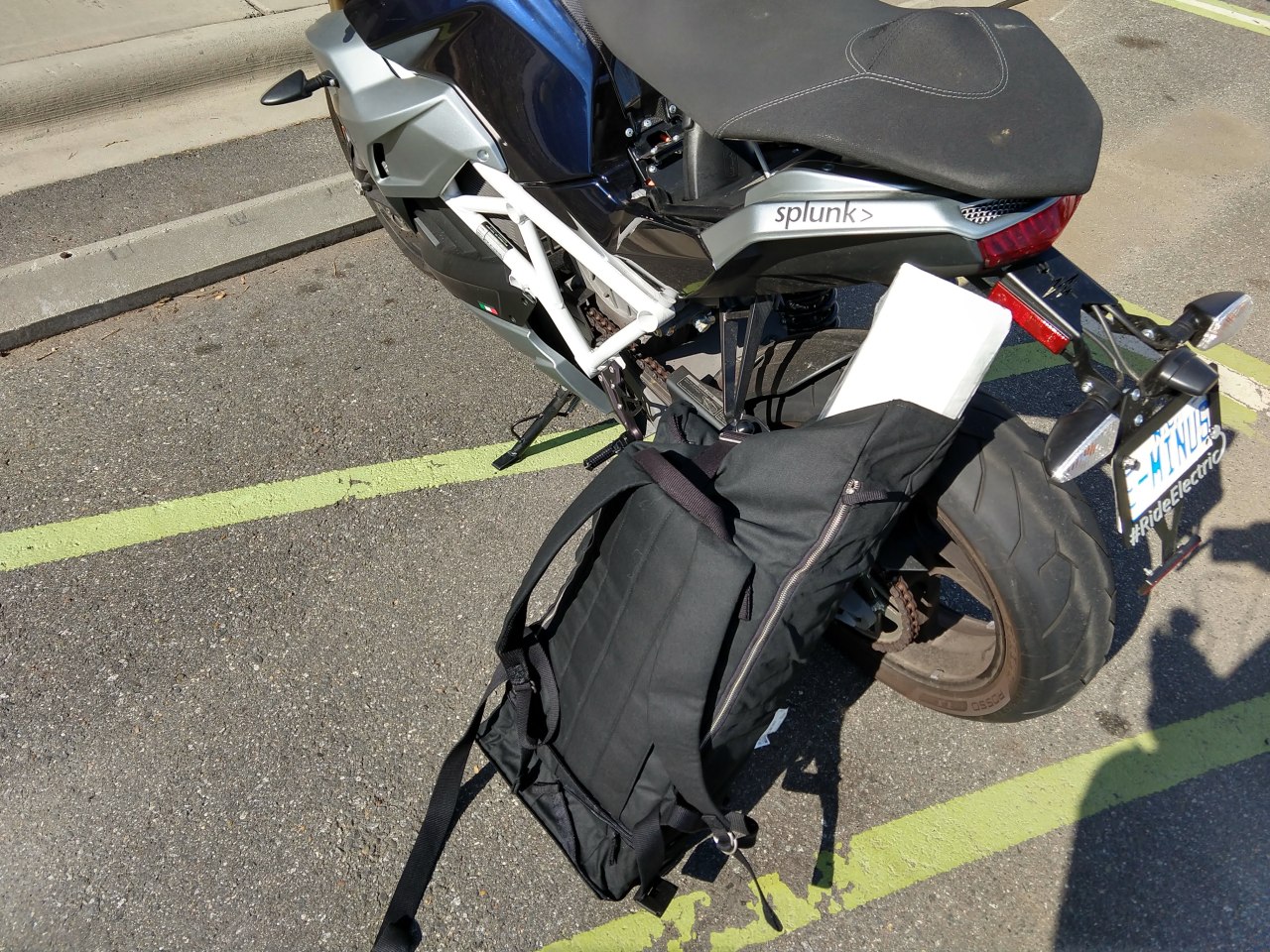 The single longest item was the SKUBB drawers at 30″ long. All of the other items were 21″ or smaller and fit inside the backpack just fine. As you can see from the above photo, it all fit quite well! Well, that’s it … mission complete. Now it’s time to return home. Once again, I failed to note the SOC of the battery before I charged at a AAA Auto Service Center down the road from IKEA. I can tell you that the session was a whopping 19 minutes and 43 seconds.

I arrived in Salisbury with 43% SOC. I knew I needed to let the bike fully charge to 100% to make it to Greensboro, so I plugged it in and walked over to The Smoke Pit for a meal. I love the local food that you discover waiting for your EV to charge. It is one of the reasons that I like driving and riding electric. The bike finished charging in 37 minutes, before I’d gotten my check. It was time to head to Greensboro – the half-way point to home. 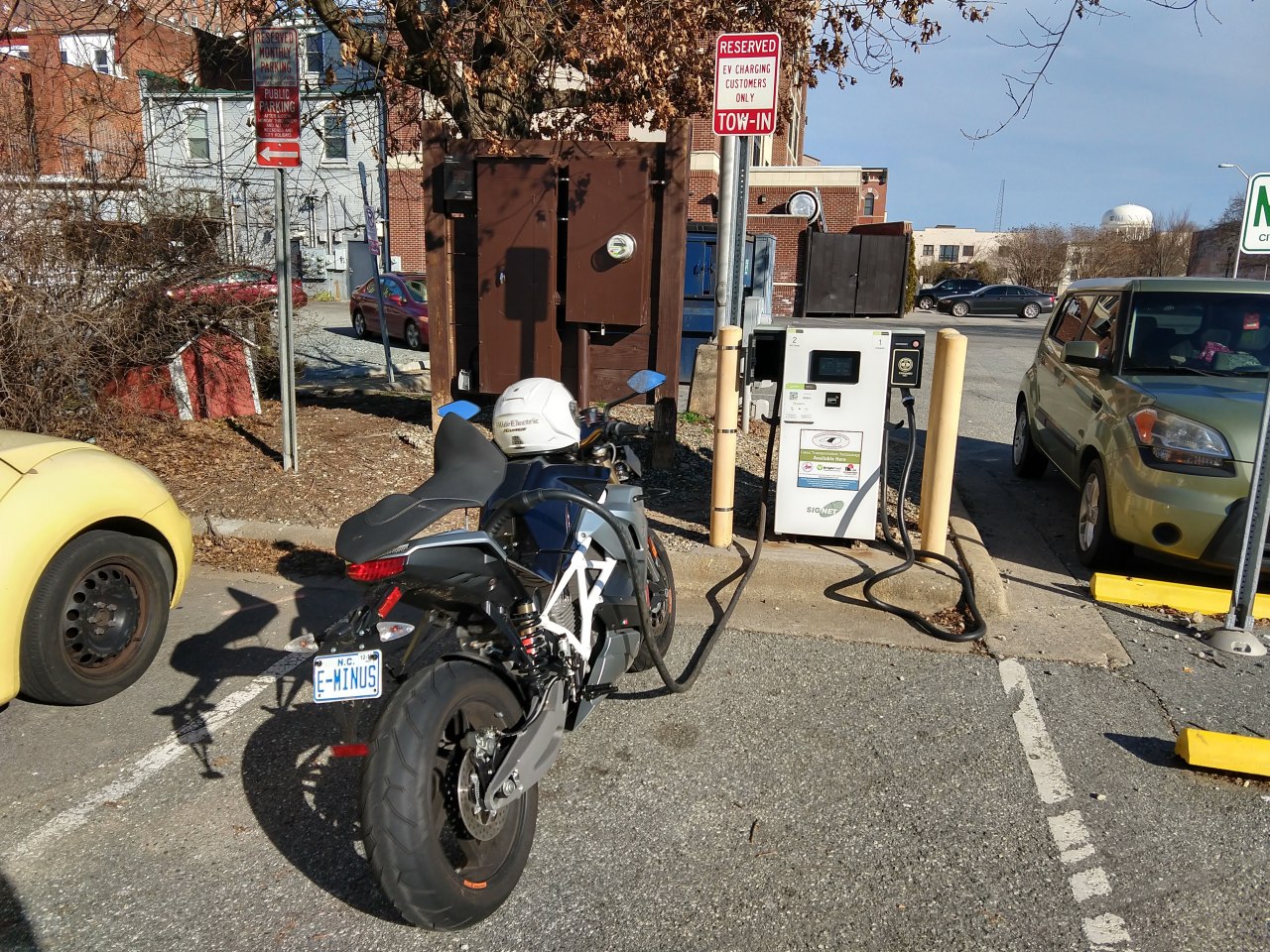 When I arrived at Greensboro, I stopped my GoPro and had just begun to initiate the charge when a Chevy Bolt EV rolled up. The owner was infatuated with the bike, as most people are, and he began to ask me a ton of questions. Because of this friendly, and welcomed, distraction, I failed to note the % SOC I arrived with. I charged for 27 minutes and got to 87% SOC. I noticed that this was the first charge that didn’t draw 70A; it was only drawing 58A. I hypothesized (and soon confirmed) that 6 DC Fast Charging sessions and 284.8 miles of riding at 65-75 mph had taken its toll on the battery: It finally got “hot.” 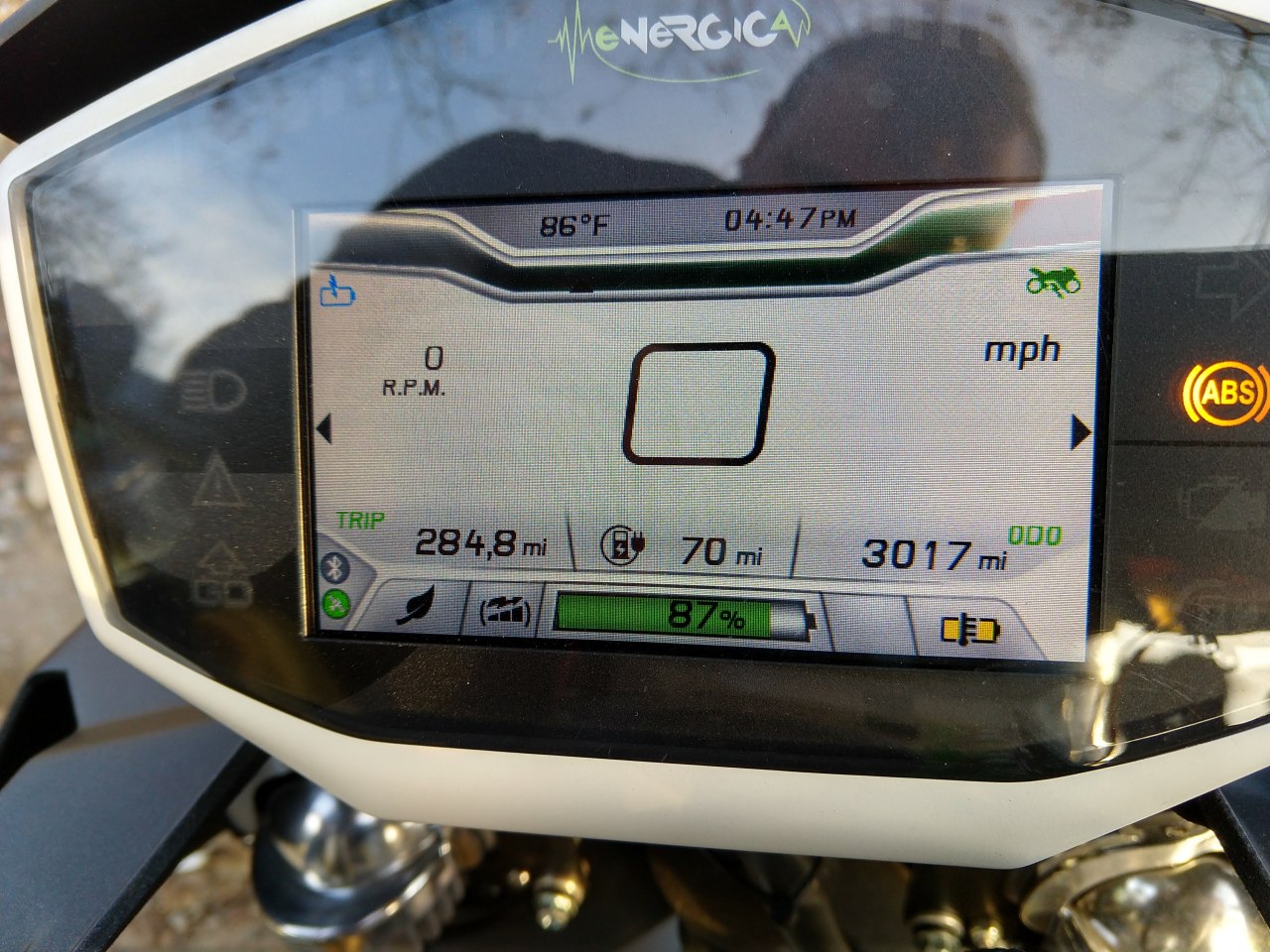 Notice that yellow battery with the temperature symbol in the lower right corner? Up until now it had been green – meaning the battery was in the normal temperature range for operation. Yellow means that the battery is above the optimum operating temperature, and I hypothesize that red means the battery is too hot to charge (but have yet to confirm this). Being too hot to charge is the reason I traded my Zero SR in for the Energica (but that’s a post for another day). I decided to pay attention to how many miles it took before the passive-cooled battery (air flows through cooling ducts in the battery as you ride the bike) cooled back down to the normal temperature range. The answer was within 15 miles at 70 mph with an ambient temp of 86F (per my instrument cluster). Not bad! So, off to Hillsborough….

I arrived in Hillsborough with 25% SOC and charged for 20.5 minutes while I recharged the GoPro and planned my route home. There was a bad accident on I-40 and it was 6 p.m., which is prime congestion on the major roadways. Google suggested a rather roundabout hour-and-a-half route, but it was my best shot since all the “35 minutes without traffic” routes were over an hour estimate. I dropped the bike into Eco mode since I wouldn’t be going above 55 mph and headed home. I didn’t note the SOC when I left – it was around 80% – because I was getting pretty tired by this point in the journey. 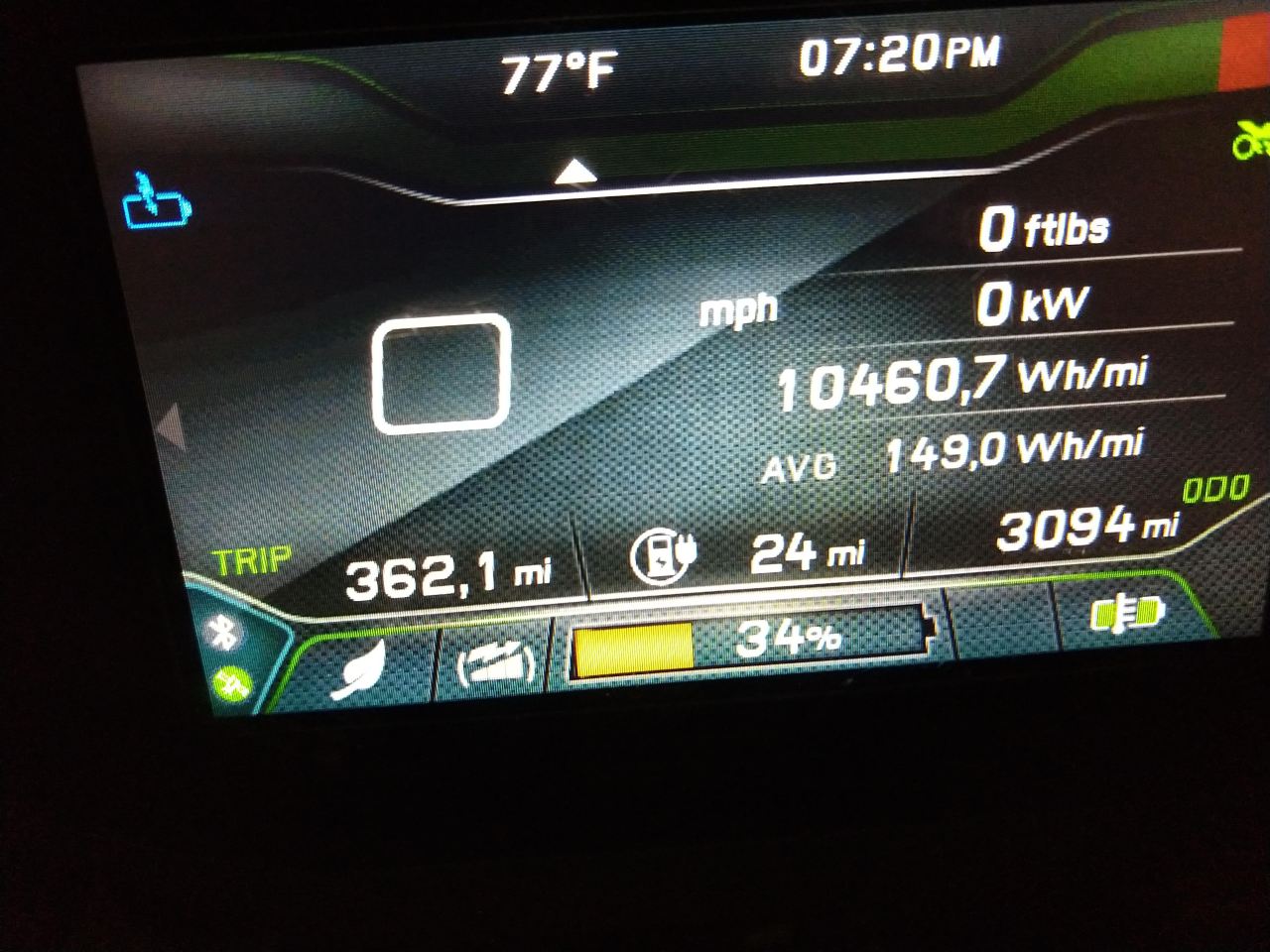 The yellow battery light greeted me when I turned the bike on, but after a few miles of riding, it went back to green. The ride home was largely uneventful, save for one oddity. Earlier in the story I told you to remember the intersection of Six Forks and Millbrook in Raleigh. Well, a funny thing happened as I approached that intersection. I tried to pass a Toyota truck and failed. I let go of the throttle but the bike kept coasting – the regenerative braking stopped. I looked at the instrument cluster and it says “Undefined Fault. If problem persists, contact service center. Press MODE to skip.” I wish I’d taken a photo of it, but it lit up the red warning triangle and the “yellow submarine” malfunction light (it’s the same check engine symbol that cars use, which is ironic to me). I coasted to the light and cycled the ignition; the bike came back to life like nothing happened – save the lit malfunction indicator. The malfunction light will stay lit if the problem persists, but after 4 ignition cycles where the error doesn’t come back, the light resets. I cycled the key 3 more times and the light went out and never came back. I made it home with 34% SOC at 7:20 p.m.

Based on how the Eva handled this long day of riding, I feel confident about my upcoming trips: DC, Atlanta, and the infamous motorcycle jaunt at the Tail of the Dragon.