Since 2011, Plug-in NC has organized an annual summit to celebrate each year’s successes and plan for the future. Starting this year, however, the Plug-in NC steering committee decided to transition to a biannual summit, offering one in the spring and one in the fall. The spring summit would focus on sharing information about activities happening across the state, while the fall summit would complement that information-sharing with increased collaboration and discussion among attendees.

On May 30, 2018, Plug-in NC held its inaugural spring summit. The event, hosted by the Piedmont Triad Regional Council, was a huge success, with more than 70 people gathering to network and learn about EV developments. There were representatives from electric car and bus manufacturers, charging station developers, electric utilities and cooperatives, regional energy efficiency groups, government organizations, the broader EV community and more.

Arlene Brown, Plug-in NC program manager, kicked off the summit with an overview of Plug-in NC and introductions. Next, Whitney Schmidt, EV charging sales director for the Carolinas and Tennessee at ChargePoint, provided an update on the state of the EV industry. She discussed driving and charging trends and what to expect in the years ahead, noting that North Carolina will continue to see substantial vehicle and infrastructure growth. After a quick break for lunch, the final two presentations got underway, both focusing on the rise of electric transit buses in the Southeast and U.S. more broadly. Adam Fischer, director of transportation for the City of Greensboro, described why the city is pursuing the technology, including the buses’ improved fuel efficiency and reduced maintenance costs, total cost of ownership, emissions and noise pollution. Greensboro will be the first municipality in North Carolina to have electric buses when it receives 10 from Proterra later this year. Eventually, it hopes to electrify its entire bus fleet.

Eric Reynolds, regional sales director for Proterra, then discussed his company’s vision and achievements getting electric buses on the road across the country. With technology improving and prices dropping, the transit market is rapidly shifting to electric drives. Eric noted that by this time next year, there should be nearly 50 electric buses operating in North and South Carolina. 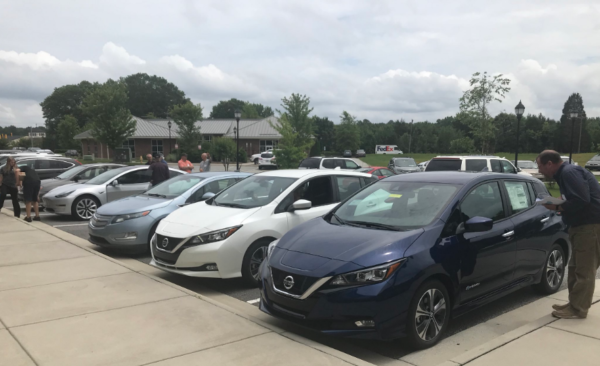 The event concluded with an opportunity for networking and an informal EV show. Attendees stayed long after the summit’s official end to speak with others in the field and check out the cars that people drove to the event, including the 2018 Nissan LEAF, Tesla Model 3 and Honda Clarity Plug-in Hybrid.

Plug-in NC wants to thank everyone who attended the spring summit to share ideas and learn about the exciting developments occurring in North Carolina. The future is electric!

Plug-in NC is a statewide program that promotes EVs throughout North Carolina. Since 2011, it has worked to spread awareness and education, reduce barriers to EV adoption and conduct research to help integrate them into local communities. Individuals and organizations can join Plug-in NC to show their support for driving electric and connect with others with a similar mission. Plug-in NC members are businesses, organizations, schools and communities that have demonstrated a commitment to EVs by installing charging stations, adding electric fleet vehicles or educating the community about electric transportation. Plug-in NC ambassadors are individuals who are passionate about EVs and support Plug-in NC by volunteering at events, giving presentations, writing blog posts and more. Also, feel free to connect with Plug-in NC on Twitter, Facebook and Instagram!